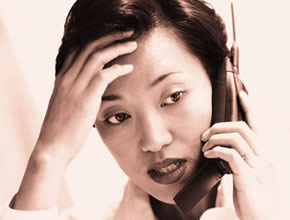 Death is the only happiness and the only relief. ”

“Contrary to popular belief, the world’s no hope at all.”

How frustrating these ideas. The first sentence from a newspaper classified ads, the second sentence is an anonymous inscription on a classroom blackboard, and both show what psychologists call a “presence of anxiety” (existential anxiety) – meaningless frustrated existence.

When I was a freshman, I was also plagued by similar anxiety, until my friend introduced me to the Bible, Jesus, annoyance stopped. After accepting Jesus as Savior, I found □ release me, is no longer a slave to anxiety. I, as a student majoring in psychology, perceived by many serious mental illness are derived from a number of small problems, and then looking at Jesus deal with these small problems in my life, so I majored in psychology feel extremely interesting.

Consider the following two definitions, and then discuss the four major causes of anxiety.

“Anxiety” represents the emotional state of confusion, fear and worry characteristics. It is not external pressure, but the face of the intrinsic reaction difficult environment. “Christian” is to recognize the lack of fellowship with God’s people, and fully believe that Jesus is the only way to restore that relationship.

Four causes of anxiety are guilt, fear, lack of interpersonal relationships and lack of meaning in life.

Failed to meet the criteria (intrinsic or extrinsic given) often cause guilt, psychologists often think these feelings from past problems or legalistic moral code caused. Many people have these problems, but the more plausible explanation is that a person has a sense of guilt because he does have done something wrong, if this is true, then, to treat a person is going to guilt he admitted mistakes, but, This is quite difficult.

The University of Illinois psychologist OH Mowrer noted a dilemma at:

At this point, we encounter difficulties, because unless people confessed their sins, or else they will not completely change, but a very difficult pleaded guilty unless he “has been changed.” In other words, totally incompetent is a deep sense of their self-serious “insult,” and he must have a new source of power to endure it.

He gives strength to endure it, we must come □ before, confess our sins and incompetence, we accept □ moment as Savior, God forgive all our sins – past, present, and even future The Bible says, “□ (Jesus) died on the cross, Himself bore our sins …” and “… paid a ransom to forgive us our sins and to make us free …” Every year we spend over ten, hope psychology and psychiatrists guilt will solve our problems, but Jesus give full pardon – freedom from guilt, and is free of charge.

Consider two fears: the fear and the fear of death on the environment. Fear of death is perhaps the biggest fear of people, when my college sophomore, students live next to me was struck by lightning and killed, and his death in the same room for me is very shocking, they began to think seriously about death implications. Anxiety struck.

Accept Jesus as Savior this issue is not dead, and when he accepted Jesus, he carried out his eternal relationship with God. The Apostle John wrote to all Christians: “… God has given us eternal life, and this life is in the Son of God who has the Son has life ….” For Christians, death to fear.

Fear on the environment will generate anxiety. Daily anxiety we often encounter include economic, insufficient, and fear of personal safety and health of the community.

All this fear often occupy our thoughts, so we can not enjoy the privilege of living, a series of concerns that we find ourselves merely exist. However, how can we really protected?

Financial security is negligible, the risk of injury and in close proximity, like on the highway passing express train, we can never guarantee that everyone will use the way we do things.

One summer, four girls and I drove from Washington to California, since then, I know what to fear. Facing responsibility, I became a little worried that if the car breaks down, or one of the girls was sick, I can I do? If there is an accident, so what? Moreover, the girls decided they expect me to everything.

At that time, I became fearful, until I remembered that Jesus told his disciples, saying: “Do not worry eat, drink, wear, your heavenly Father loves you, but also know that you need to seek ye first the kingdom and □ □ righteousness, and all these things shall be added unto you. “It really adds.

A physician William Glasser in his book Reality Therapy wrote, everyone experiences the two basic needs – to feel for themselves and others valuable needs, and the need to love and be loved. He mentioned that the best way to meet these needs is to establish a close friendship with another person, the other party can accept the real him, but when he made irresponsible behavior, the other will remind him honestly.

Relationships are important, but the person who is always, always disappoint us, there is always a wrong decision. The final treatment is not exactly square with our Creator intersect it? □ is faithful and righteous, never let us down, and often give us the best advice. □ love because we Christians can experience the freedom to love others, for □, we are priceless: “Only Christ while we were yet sinners died for us, God’s love was manifested toward us . “A man will cherish forgiven himself, because he is a” new man, “he is safe in Christ. The apostle Paul wrote: “For I am convinced that neither death, nor life, nor angels, nor principalities, are capable of, what is now, what is the future, is height, the lower is not The creature can not tell us and the love of God, the love of our Lord Jesus Christ. ”

The lack of meaning of life

Another doctor conducted a study object thirty-one thousand one thousand nine hundred and forty years in captivity in Japan and South Korea coalition soldiers. He found that, although there is enough food to supply them, there are still eight thousand people died, he concluded that death was “desperate.”

The only way this situation and over a thousand years in prison because of their beliefs Christians comparison was released, is to continue to share God’s love, especially to their persecutors.

Savior’s love sustains them, pushing them to become “messengers of Christ”, in addition to clothes to be the King of Kings, as □ messenger, what greater goal in life?

People often make Christianity is merely a psychological “trick” or gimmick, they would think, after all, if someone believes the Bible is the Word of God, how could he not make myself believe that the Bible is true, and through the Bible to find a wonderful lifestyle?

After some research, I must say that Christianity is not an illusion. There are three reasons:

First, is the object on the Christian faith – the Jesus Christ. □ □ evidence of divinity and resurrection, □ achieve a prophecy, and changed the lives □ have □ declaration proves to be true. Because I trust the object is genuine, trusting that the object will be true.

The second reason concerned with the nature of human personality. Human character, including intellect, emotions and will, psychologists believe that we will not have full control of our emotions, our intellect can not, but some people are like that, like a prisoner, they found that people who care about torture is possible . Such a thing, unless there is supernatural intervention, it is impossible to happen.

Third, Jesus says that this response to our psychological problems or other issues books – the Bible. Although the Bible spent more than fifteen hundred years is written by three languages, 40 different writers (most of which have never met before) written, but the problem is the same, the content is also consistent with, and in the history accurate. The Bible is written in more than eighteen hundred years ago, contains a recipe today many people experiencing psychological problems. The Bible is a supernatural book!

When I was at university, I was a professional psychologist to see how these issues are curious. When I finished my term paper abnormal psychology course, discuss how Jesus treat anxiety (including the idea of ​​this paper come from the study), I sent a paper copy to my textbook author.

In his reply, he said that he was extremely interested in its contents. A few months later, I personally visited him, he said he wanted a personal relationship with Jesus Christ, when he and I share the “Four Spiritual Principles” statement of Jesus, he prayed to invite Jesus Christ into his life. In the latest edition of his book including one phrase, put a lot of people today get psychological help through Jesus.

People in the world are now looking for a freedom from fear and guilt, they need to know that God loves them. If you’ve never invited Christ as your personal Savior, I encourage you to do so today it; if you have believed in the Lord, please let others know how you can □.

□ release us, let us “anxious for nothing, but in everything by prayer and supplication with thanksgiving let your requests be made ​​known unto God, the peace of God which passeth all understanding, will in Christ Jesus, keep your hearts and minds.”
~ Author: Rusty Wright ( http://www.probe.org/rusty/ )
~ thank OCCR, Leadership University and the author allows the translation of the article published in the online article. Original published in the Collegiate Challenge, Vol. 12, No. 1, Spring 1973.