This zany Christian author is a self-proclaimed genius, jelly roll addict, and shower singer who began her writing career on the bathroom walls of St. Joseph's Catholic Elementary School. Now her complaint letters have spanned the globe and her writing appears in restrooms throughout the country. She's been called the Christian version of Erma Bombeck and her book, "Hugs, Hope, and Peanut Butter," has received rave reviews, two awards, and endorsements by famous comedians. Jordan has two boys, ages 33 and 59. She's been married to the 59 year old for 35 years. She describes herself as a ten year old kid trapped in a grandmother's body. Jordan has been held captive for a quarter of a century in the north woods of Wisconsin where she shares an empty nest with her rocket scientist husband and their badly behaved toy poodle, King Louie, who rules the household with an iron paw. Once an active and energetic volunteer and career woman, life as Jordan had always known it came to a screeching halt when she fell victim to a mysterious connective tissue disease. The joint and muscle pain, migraines, and fatigue turned her life upside down. Due to illness complications, Jordan was temporarily struck blind; so she understands loss: loss of health, loss of employment, loss of hobbies, loss of self esteem, and sometimes even loss of hope. After her grandson was badly burned, Jordan created The HUGS and HOPE Foundation, a nonprofit charity devoted to cheering critically ill and injured children ( www.hugsandhope.org ). Through sharing the love of God and His word, Jordan strives to impress upon families in crisis that God is with them in their trials and longs for a closer relationship with them. She encourages hurting people to learn of the awesome love, peace, and joy available to those who seek God and serve Him. Jordan is known as The Peanut Butter Queen because of her slogan: "Love and joy are sticky, like peanut butter. When you spread them around, you can't help but get some on yourself." Jordan's inspirational and humorous essays are available in her book, which is illustrated by children battling for life. Each "slice of life" essay includes a spiritual lesson and related Scripture. The award winning book is endorsed by comedic legend Phyllis Diller and Jay Leno's writer, Wendell Potter. By combining hope with humor and drawing upon her own experience of living with chronic pain and depression, Jordan shares lessons she's learned and practical coping skills. In her book, she recounts her search for the perfect purse, camping adventures, aging without grace, and dealing with her "very male" husband. Some chapter titles include, "Limburger Attitude," "Is Broccoli Hazardous?" and "Life in the Manure Pile." Learn more about the book at www.hugsandhope.org/sale.htm. Jordan has received awards for her work with children and has been featured in national magazines as well as on WGN-TV, Wisconsin Public Television, and Billy Graham's radio program, "Decision Today." Her devotionals and stories have appeared in "A Cup of Comfort" and other anthologies. She's been published in "Heart Light" and "Obadiah" magazines and is a regular columnist for "Handmaidens" magazine and "My Walk With Jesus" Christian newspaper. Marsha Jordan, who has eaten enough chocolate to make the Guinness Book of Records, spends her days ignoring her dirty oven, dropping out of exercise classes, and dreaming of the things she'd like to do but probably never will -- including overcoming the trauma of class picture day in second grade. Between writing, running a nonprofit charity from her home, and enjoying time with her grandson, she devotes herself to the pursuit of anything fried in axel grease or dipped in chocolate; and she will follow you anywhere, if you offer her a piece of fudge cake. Learn more about Jordan at www.hugsandhope.org/queenie.htm. 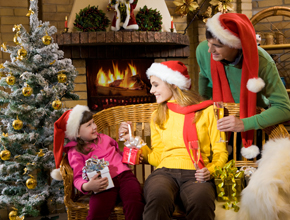 Little girl with giftbox looking at her mother with man holding champagne near by 每年圣诞节的时候，你会不会兴奋的忽略了圣诞节的真正意义？你的家事在这个时候是不是多的让你烦透了？好吧，我 劝你还是面对圣诞节一... Read More >